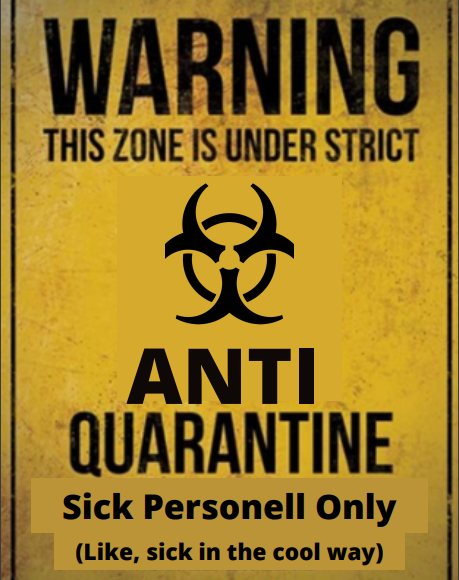 You heard me. ANTI. QUARANTINE.

Shelter Out of Place, #LeaveHome, Anti-Isolation, whatever you want to call it. We just need MANDATORY NOT STAYING INSIDE. It’s the only way to even the score. This butthole of a  virus has taken a big fat dump on society, and now, it’s our duty to grab it by its hair, shove its face in the poop pile, and make it LAP. IT. UP. The only way to do this…Anti-Quarantine. Here’s the plan.

Just as the government mandated this current lock-in, we’ll need their support for keeping people out and about. There’s a few rules we’ll need to pop into the system real quick, executive-order style, in order to encourage people to step outside and stay outside. So, president Donnie T, please consider the following.

Yeah, if you thought you were gonna be getting takes on like Healthcare Reform or something, you came to the wrong place.

First things first, let people trip balls if they want to. Our bodies and our minds have been confined to the couch for weeks, let us take a lil’ staycation to the 4th dimension alright? Going over to a friends house to watch TV isn’t gonna be enough I’m gonna want to go into outerspace and unless Elon’s got the spaceship equivalent of a Nissan Altima coming out that’s impossible unless I’m putting science-paper in my tummy.

Imagine if this happened over the winter…literally think about it. If we had to stay in our houses for 6 weeks straight and it got dark at 3:45pm, I would guaranteed have a mental breakdown by Day 12, and that’s being generous. That video of celebrities singing “Imagine” would’ve come a week earlier and it would’ve just made things worse.

Being dark out early has caused too much depression since Ben Franklin decided 300 years ago that it was too hot for his corn crops. I won’t stand for it anymore. Right now, we’re losing precious months of going outside. We’re missing the rebirth of the flowers (and my social life). We’re losing the few months where it’s a little easier to make it through the day right now and as a little gesture of encouragement to the American people to go outside longer once this blows over, we need the Commander and Chief to get rid of this ancient buffoonery.

Puppy Care For All

Every 23-28 year old who’s relatively lonely decided in the past few weeks that they wanted to buy a LIVING CREATURE to pass the time.

People I’ve seen blackout brunch drunk at 2pm in the past year got all cocky after keeping themselves alive for one week and figured “this shit’s easy imma get a lil puppy to play with” not realizing they just got locked in for a 12-14 year commitment.

You realize that once this all blows over the world is literally going to be the most fun it’s ever been right? And you just got yourself a little furry semi-baby that’s life literally depends on you?

Picture this. Quarantine is over. To celebrate, your entire friend group decides to go to an all inclusive banger of a resort in Mexico. Guess who’s not going? YOU.

Why because I have to watch the dog? I’ll just get someone to watch it.

WHO? Literally who? Your neighbors are gonna be taking weekend trips, the only friends you trust have become avid substance abusers (possibly due to the new psychedelics rule, that’s on me), your parents probably warned you not to do this and you can’t let go of your pride to ask them to watch it, and Dog Kennels will be non-existent because the economy doggy-bag is gonna hit the fan.

So now, while your friends are competing in a “who can butt chug the most tequila competition” at the Jimmy Buffet’s Margaritaville in Punta Cana, you’re arguing with your girlfriend in IKEA about what sofa to buy because your living breathing instagram-likes-generator grew up to be a hellish demon-hound that you didn’t have the effort to house train. Does that sound fun? NO.

So we need a government bail out. Puppy Care for all. Free dog-sitting for anyone who wants it, no questions asked. We can call it the St. Bernard Sanders Act as a consolation prize for our boy Bernie and we guarantee the stupid young-professional American people who copped a companion in their desperate time of loneliness and boredom, a little relief.

I’ve had my gripes with all the laws around bars for a while but now seems like a perfect time to revisit the whole system. Look, bars are struggling hard right now, thousands are being forced to shut down and when they open back up, they are going to need to be able to go balls to the walls to get as much money as possible in order to recover. That being said, there’s some things the law just needs to look the other way on during Anti-Quarantine.

First of all, bars should not close any earlier, than 3am. Now if you’re from New York reading this you’re probably like “ok yeah, done, easy”, but you don’t know how hard it is traversing through the Boston Bar Scene. You want to get into a bar? You better be there by 10 at the latest. You actually want to have fun at that bar? You might as well have dinner there at 7pm and start getting blasted. These places legit start shutting down at 12:30 and they give you no choice but to go home to watch Skate 3 Trick Compilation videos until 3am and let me tell you, it’s awful!

Allow bars to stay open till at least 3am. I will be the drunken hero of the recession buying a round of 8 Green Tea shots hammered at 2:45am to stimulate the economy. I have no problem stepping up to the plate and carrying that cross for small businesses. You just gotta let me.

My mind is a horrible place already but now you’re locking me in my childhood bedroom to be alone with my thoughts for weeks on end? There hasn’t been a happy hour in my day in a longgggg time. And don’t even tell me “at least we’ve had Zoom happy hours!”, because those don’t exist. It’s an oxymoron.

In Anti-Quarantine, we can not be denied REAL happy hours and the hilariously awful deals that come with them. Give us the $5 pitchers of Natty Light, give us the $2 tequila shots at 5pm on a Tuesday, give us all you can drink margaritas in a paper cup for $12. WE NEED IT NOW MORE THAN EVER. But nooooo, Massachusetts outlawed happy hour because people got too drunk. Uhhhh, newsflash, WE ARE GETTING DRUNK ANYWAYS. Just let it happen, give the bars more business, and let us enjoy the world we have been deprived of please, I beg you.

Throw Open-Container Laws In The Garbage

Lastly, if all of this fails, we have to get rid of open container laws. Let me drink a beer in line for the bar. I won’t mind standing in line, these guys can charge $5 for a can of Busch Light on the sidewalk, and it will make bar hopping a much more viable option. Instead of one bar monopolizing all the cash, now I’m hopping from place to place, pollenating each establishment with the little disposable income I’ll have left after spending my money on what really matters, the psychedelics and my puppy (yes, I will get one once Puppy Care for All is passed. I’m better than you guys because I waited to fill my void of loneliness once it made sense logistically for my lifestyle.)

And to address your questions, yes, I realize most of these changes I’m suggesting revolve around using substances to cope with personal problems. I am aware. You’re aware. This is a no judgement zone. Moving on.

Give Everyone Free Mopeds 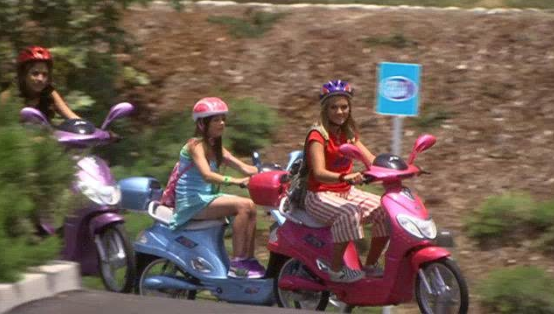 Remember in Zoey 101 when all the kids at PCA got free mopeds? We need that but for the 300 million citizens of the United States. It’s way easier to convince your friends to meet up and hang out if they can travel there on a freaking land jet ski.

This is ridiculous, how would this even be possible?

I know my plan has been grounded so far and this is gonna be the one that everyone thinks is “too radical”, but hear me out. We’re giving $1200 to every citizen as a stimulus right? We can make cheap Mopeds for that cost guaranteed! Car companies like General Motors are making ventilators and stuff now you’re telling me they couldn’t figure out how to mass produce vespas? It’d be a piece of cake. More travel, more fresh air, and you’re having more fun. Those are the 3 pillars of Anti-Quarantine lifestyle and a Free Moped checks all 3 of those boxes.

That’s right. No more “oh me and the gf are gonna have a chill night”, you’re getting your ass out to the bar or you’re handing Uncle Sam a BAG. Having a significant other is the best way for people to bail on going out with big crowds and we can’t have selfish people in relationships whipping out that Get Out of Jail Free Card once this is all over. Not on my watch.

I am a man of the people, dedicated to hanging out with friends and don’t even want to tempt myself with the excuse of bailing to hang with my girlfriend. That’s why I haven’t had a serious relationship in years. For this reason and this reason only.

So when this is over and we want more people to stay outside, I think to play it safe, we tax people on it! You don’t want to slam shots with me at the bar because your busy building a meaningful romantic relationship that could last a lifetime? That’s fine! But you’re funding my free government-issued moped because of it bitch. That’s just the Circle of Life.

I mean, there you have it folks. These are just a few policies I think will get the ball rolling on a robust Anti-Quarantine Plan. The plan that will show this virus and others lurking in the shadows ready to pounce on Tommy Hanks that THEY BEST NOT MESS WITH US. We need to undo what’s been done, and I believe this is the best way to go about it.

There’s no going back to the way things were, but that doesn’t have to be a bad thing. We’ll get through this. In just a few months, who knows, maybe our free mopeds will pass eachother, we’re both spaced out of our minds on LSD, on our way to drop our cute little puppies off at the sitter-center so we can booze on the sidewalks all night. Brings a tear to my eye just thinking about it.

Till then, stay safe folks.