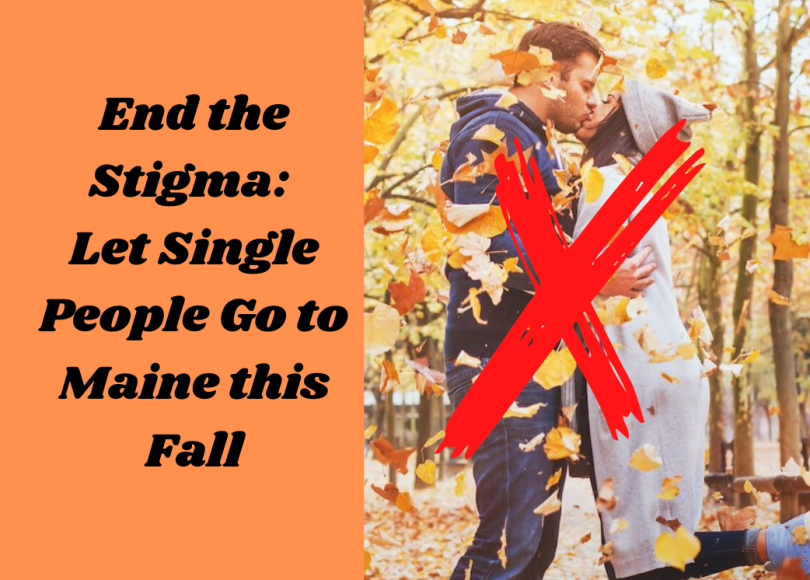 It’s about that time of year when people start getting absolutely giddy about the most mundane things, and you have to be excited about these things because otherwise, Fall sucks.

Summer objectively has way more fun activities: concerts, beaches, lakes, the pool, day drinking, everyone taking it easy at work…it’s the best 3-4 months of the year. So when the degrees drop and the foliage falls we trick ourselves into thinking it’s awesome by getting excited over stupid little things.

All nothing to get geeked about…unless you have a significant other. You think me and my boys are getting all excited about putting on our flannels, heading to the orchard to gather fruit, and finishing off the day by snuggling up to watch Hocus Pocus? HELL NO. But you know who is? COUPLES.

You need to recognize your couple privilege as Autumn arrives, alright? While you’re smiling about all the cute aesthetic instas you’re gonna get off in the next few weeks, we’re facing the frontlines of seasonal depression without a weapon.

And there’s no place where more of this discrimination happens than the state of Maine in September and October. Which is why I am calling on the state, and specifically the city of Portland, to open its borders to single refugees amongst the rest of New England.

Go ahead and ask anyone you know who doesn’t live in Maine if they’ve visited Portland. If they have, I guarantee it was with a romantic partner. For far too long, New England couples have been able to enjoy the splendors of the Pine Tree State without having to be bothered by partner-less people. They think just because they’re in a relationship they are entitled to enjoy all the best attractions in Maine without even considering that single people would enjoy going too. And guess what, WE WOULD ENJOY IT.

I mean look at this list of The Top 15 things to Do in Portland…the NUMBER ONE THING TO DO?

EAT A DONUT?? Is there anything a single person wants to do MORE? You think just because you hold hands on the way there you’ll enjoy THESE more than ME?

NO CHANCE. And there’s a ton of other stuff on this list of things to do in Portland that literally every single dude would love to do.

You don’t think me and the boys wanna cosplay being these two on a stormy Saturday?

And of course couples get excited for “Spooky Season” as if dudes aren’t constantly looking into scary shit for fun 24/7. You may like watching “Halloweentown” with your bf or gf in your PJs but I’m alone in bed at 3am watching Youtube videos titled “The Aliens Who Shot JFK Are Still Out There and They’re Coming for YOU” almost guaranteeing my sleep paralysis demon will visit me once I close my eyes. WE ARE NOT THE SAME.

So you think I won’t like going through a HISTORIC CEMETERY WITH DEAD SOLDIERS?

That bitch is guaranteed haunted. Right up my alley, just like a ton of the other stuff on this list.

#8: Go on a Food Tour – oh you want me to eat food at multiple restaurants? SAY LESS.

#10: Enjoy the Craft Beer Scene – Is there anything more stereotypically enjoyable for a single man in his mid-twenties? I put up NUMBERS of Allagashes swallowed year-round but for some reason October rolls around and suddenly I’m not allowed to step foot in the place where it’s made?

#11: Visit the Portland Museum of Art – You give me and my friends a few gummies and I’ll probably end up crying in front of a painting in this thing because of how moved I am.

#15: Eat lots of lobster – You think enjoying the delicacy of this state should be reserved for just couples? NO. The blog even recommends a place called Bob’s Clam Hut, and I don’t even need to know more than that I can tell just by the name it’s FIRE and me and my buddies will be asking to shake Bob’s clammy hands by the end of the meal.

Portland should be a Single Sanctuary if anything! And I will not tolerate this infringement on my rights this year. Get ready relationship-havers, because AirBnBs are getting booked by the boys this fall. So when you’re stuck behind a group of four fellas taking it slow to watch the foliage while listening to some acoustic John Mayer, just remember you’ve had the luxury of doing this for centuries, and it’s our first time.