If you’re an American who has had access to a cable television between Thanksgiving and Christmas in the past 15 years, chances are you’ve seen the beloved Christmas movie “The Polar Express” or maybe you’ve even read the children’s book it’s based on if you’re poor or old. This enchanting tale describes a whimsical Christmas Eve adventure as a magical train takes a few lucky little ones to the North Pole to meet Santa Claus before he takes off in his sleigh…but what they don’t tell you is that there are TWO Polar Expresses, and I went on OTHER one of these two locomotives, and let me tell you, there was no whimsy to be had.

It was Christmas Eve 2008. I was 12 years old. I had known Santa wasn’t real for a very long time. I wasn’t having an existential crisis about it like that kid in the movie, I was just pumped I was probably going to get a new iPod tomorrow morning. But I didn’t wake up in the morning, I woke up at 2am to what smelled like something burning.

In hopes my first Christmas present wasn’t going to be my house burning to the ground I followed the scent to the front door and looked out the window to see it: The Polar Express. Shooting amounts of coal smog into the night sky that could singlehandedly destroy our Ozone.

It was endlessly long and looked absolutely nothing like the one in the movie. This “express” looked like a New York subway, not an early 1900’s luxury train only bootleggers could ride during the prohibition. I thought a subway might’ve just ran off the trails in a freak accident and slid all the way to my house in the suburbs until I saw “The Poler Xpress” written in yellow spray paint on the side of it. Next thing you know, a guy who looks like Tom Hanks pokes his head out of the edge of the train and says “All Aboard the Polar Express!” although it wasn’t this version of Tom Hanks.

It was this one… 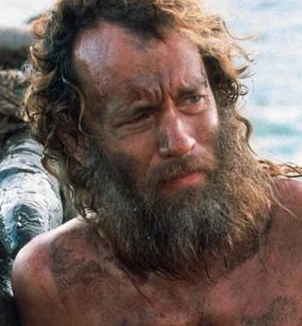 So I’m obviously terrified, but then it hits me: this has just gotta be a weird dream. I had nothing to lose and if this dream has me end up in the North Pole chilling with Santa Claus it’s worth it to hop on. So I do.

Turns out my Massachusetts suburb was one of the last pickups before the journey somehow and I couldn’t even find a seat. So I’m standing holding on to a pole for dear life because remember THIS THING ISN’T ON RAILS. The weirdest thing too is that this isn’t even just kids. There are old ass people on this train. There’s a grandma with a respirator in her nose but she’s not moving and her eyes are closed which is concerning. There’s a pregnant woman sitting down holding two crying babies in her arms screaming like spider monkeys. And to top it all off there’s a mariachi band at the end of the cart playing sloppy Mexican tunes and begging for change. I tossed them a dollar just because I’ve got too much anxiety to stiff them. Next thing you know the Tom Hanks looking dude is coming around asking people for their tickets. 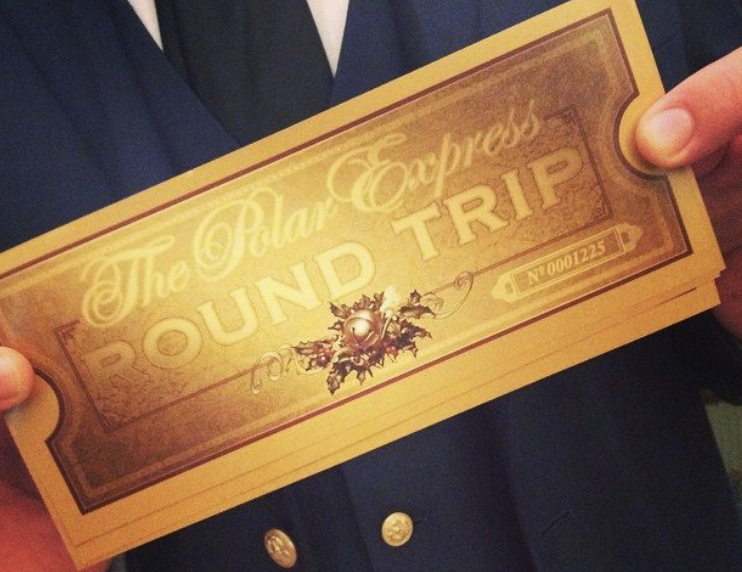 So I’m looking around like “yo where is my golden ticket like from the movie don’t you give it to me” and he’s like “what do you think you were going to take a train hundreds of thousands of miles for free? There are people that work on this train. This train needs fuel to run. If we don’t get paid, this thing doesn’t move. So give me $58 or you can get lost.” FIFTY EIGHT DOLLARS. At the time was like my life savings and I just gave those subway performers the last piece of cash on me. Luckily my Grandma gave me a $60 Gift Card to Dicks Sporting Goods and the dude said he could cut me a break. Other kids weren’t so lucky. The only other kids that got picked up near me we’re getting tossed off the train because they couldn’t pay, which is when I realized something odd, it felt kinda warm.

I mean we were going to the North Pole and it wasn’t even a smidgen colder than when I got on the train. This dude’s hucking kids out of the moving train with the doors open and no snow or anything is getting in. So I ask Hobo Hanks and I’m like “dude, where is this train going?” and he says “to see Mr. Claus of course!” which reassured me. Sure, this was a nightmare, but if I can see Santa, in the North Pole, on Christmas Eve, it’s worth all this chaos.

At this point it’s almost 2am and the only thing on my mind is “when are those dancing waiters gonna come out and give me that delicious hot chocolate” well, sure enough, 5 minutes later, a bunch of people dressed in all black suits come out with trays. I’ve never been so happy to see anything in my life…until they hit a boombox and started doing the “Soulja Boy”. As they do this they begin to pass out (not hot chocolate) but FOUR LOKOS. Look, I’m 12, I didn’t know what this was. As far as I was concerned it’s just an Special Ed Hardy edition of an Arnold Palmer. Next thing you know I’m HAMMERED screaming the lyrics to “All I Want For Christmas Is You” but changing all the “you”‘s to “poo”. I pass out for a couple hours and wake up hungover as hell with the sun melting my eye balls.

It’s gotta be about 5am and I’m watching the sun peak over these gorgeous green mountains. As I looked upon the beautiful scenery I realized…why are there green mountains HOURS north of Massachusetts?

All of the panic sinks in. The meth-addicted Tom Hanks, the spray painted subway, the Four Lokos, the “warm atmosphere”, we weren’t going to the NORTH pole…we were going to the SOUTH.

I woke up the mariachi band that had passed out after TWELVE lokos and they told me they weren’t even going all the way to the south pole, they said they were hopping off at the next stop: ECUADOR. I freeze. In a state of shock. And the worst part about all of this? I had already fallen asleep and woken up. This was not a dream.

So we finally get to Antarctica and it is freaking cold as hell. I’m still wearing flannel pajama pants, a t-shirt, and my north face coat. Not really equipped for SUB ZERO TEMPERATURES. Finally I hear the conductor yell “FINAL STOP: THE SOUTH POLE”, and we get off to see one lone factory in the midst of the frozen wasteland and a sign that says “Claus Industries”.

So it turns out Santa’s cousin “Nathan Claus” runs the South Pole division of the workshop and it is RIDDLED with child labor. Turns out the IRS is cracking down on Santa putting elves to work so in order to make all the shoes, clothes, and other stuff that’s not “toys” he told his cousin to outsource the work to little children down south. Turns out, I was going to be one of those children.

Once I saw this horrid scene I said I was just gonna wait and catch the next train back up North, this is when Tom Hanks informs me that a train ticket back costs $350 and I’d have to “earn it”. This is when I find out that Nathan pays a whopping SIXTY FOUR CENTS PER HOUR. Of course we riot at this news and Nathan calms us down by telling us we get “benefits”. What kind of benefits? Well he says we can smoke all the Vietnamese cigarettes we want (as he knows a guy who can get them for next to nothing in bulk) and that magic makes it so that time doesn’t exist down here so we “won’t be missing anything back home”, hooray!

So for the next 6 months in our time I am stitching together Nike’s for Brandons and Tyler’s across America. I am HACKING down these free cigarettes like a 55 year old construction worker and the ashes are getting all over the sneakers. The kids are thinking “my new shoes smell like smoke because Santa came down the Chimney with it!” and they’d be dead wrong. It’s not yule logs burning in a fireplace you’re smelling kiddo it’s the Asian equivalent of a pack of Newports being coughed on your shoes by a bunch of minors.

So finally I muster up $358. That means $350 for a ticket home and $8 for some black market ambien Nathan Claus sells to kids who want to knock out for the 18 hour ride home. I popped that and, like Drake in Sicko Mode, was out like a light.

I woke up to my little brother jumping on me yelling “it’s Christmas wake up!”. As I came to, I realized I was in my own bed…and it was covered in my own piss and sweat. I ran to the bathroom and splashed my face with water, trying to open my eyes to the fact that my trip to the South Pole was all a dream. I ran downstairs and had a normal Christmas. I got the new Madden for PS2, a Ripstik and that new iPod I was asking for. All was well, until the shakes kicked in. Why was I uncontrollably shaking? Well, just as the boy from the Polar Express saw the hole in his robe and realized it wasn’t all a dream, I had developed a serious nicotine addiction. The jury was still out on Santa for me, but Nathan Claus….I still believe in him to this day.