The Office, Parks and Rec, New Girl, Shameless…these are all shows that truly found their cult following after they already had multiple successful seasons. I watched the Office real time from about Season 3 on and basically watched all of Parks and Recreation when new episodes were coming out weekly. I would work so hard to finish my homework by 9 when the shows would run back to back on NBC. If I didn’t finish my work in time? Welp, they weren’t gonna get done. I worshipped the shows. After Netflix became a staple of every kid’s iPad, they blew up to all new audiences. Shameless (the unfunniest ‘Comedy’ I’ve ever seen) became everyone’s “new favorite show” after having like 6 seasons just because it got on Netflix. “Wait, did he just say unfunny?” yes, yes I did. Shameless sucks. It’s not funny. A lot of it is depressing and the majority of it is just characters doing the same things over and over. It’s exhausting. Frank getting too drunk and throwing up on a priest is funny the first time but a lot of the times the bits aren’t funny, they’re just over the top shock that is supposed to be confused for humor. But you know what’s over the top AND funny? Comedy Central’s Detroiters. 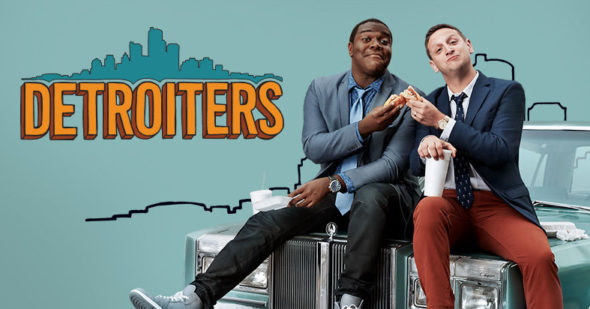 This show is everything I’ve wanted out of a comedy. It seems as though nowadays most comedies are either 1.) Actually not comedies at all or 2.) too outside of the box. For example, shows like ‘Transparent’ about a family coming to terms with their father’s sex change (more dramatic than funny, in my opinion), or even great shows like “Last Man on Earth” are funny but just not a classic comedy show that has one goal: to make you laugh.  It’s good that serious issues are being addressed in these “comedies” but when Emmy seasons come around do NOT put it in the comedy section. We need a new “Dramedy” section and I actual stand by that. Because it doesn’t make those shows bad, but it does make them take away from actual funny shows getting recognized. This show, however, is pure comedy.

The two main people in the show are some of the funniest emerging comedians in the game. Both of them come from the Second City which is basically where SNL gets all their writers and performers (with the exception of stand-ups), and they performed there for a wicked long time so the chemistry is unreal. The show basically centers around two best friends who run an ad agency together. The ad agency was started by Tim’s father, who went insane, and he gave the reigns to Tim, who is an idiot. Because of his stupidity the whole company basically left except his best friend, Sam, and their secretary, Sheila. That being said, they have to make horrible ads for horrible clients. If you love the joke ads from SNL you will love this show. You get to see a bunch of them and the “behind the scenes” of them. It’s an original plot but also keeps it so simple with their story lines.

Let’s start of with Tim Robinson.

The guy was a writer on SNL for a number of years and also was on the show for a season. He also has one of the funniest half hours of TV I’ve ever seen on his episode of the Netflix show “The Characters”. Skits include a guy who wants to buy a gun to take vengeance on all the people who blew up his spot for having diarrhea in odd places as well as a skit where he sings his newborn daughter to sleep with a song about how her future husband is going to die. The style of comedy is similar to Andy Samberg’s absurdity but he adds his own over the top screaming delivery and it’s hysterical.

Sam Richardson is notable for his role as Richard in VEEP, the cheery assistant who hangs out with Jonah, and he’s also been a small character in a ton of TV shows and Movies the past few years (Game Over Man!, Mike and Dave Need Wedding Dates, New Girl, Portlandia, and others). He’s a little more sane than Tim in the show but it’s his hysterical optimism and friendliness that makes the combo so funny.

The guys in the show make horrible local tv ads that so perfectly dumb. Here’s a little sample of some of the ads and some of the genuine funny situations these guys get in to.

I know this post was a little long and doesn’t really have a whole lot of funny takes but I appreciate stand-ups and improv guys getting a chance to really make something stupid and hilarious. These guys did it and I want them to KEEP doing it. Season 2 kicked off last week (with a new episode airing tonight at 10) and the first two episodes were funnier than I could’ve hoped. I want to see these guys get a long series run and eventually get their own big following once it drops on Netflix in 5 years. So watch it tonight so you can say you watched before it was cool. Kinda like I did in the first paragraph.