This is the second installment in my Breaking Gender Barriers Series in which I detail accounts of my life as a straight man who also enjoys things that are conventionally feminine in order to DISMANTLE THE PATRIARCHY. In this daring brave account I’ll talk about last night in which I elected to watch the hit Netflix young adult romantic comedy To All The Boys I’ve Loved Before rather than watching the Chicago Bears play the Green Bay Packers, and let me tell you folks, I might not have been watching QB’s throwing to wide receivers…but that Peter Kavinsky kid is quite a catch! LOL!

The movie follows our main character Lara Jean, a quiet lil hipster chick who likes to read books and watch movies about romance but isn’t ambitious enough to go get a man of her own. So the movie starts out with her mom, Margot, heading overseas for…college? Is her mom going back to college? Oh wait, no, that’s her SISTER. 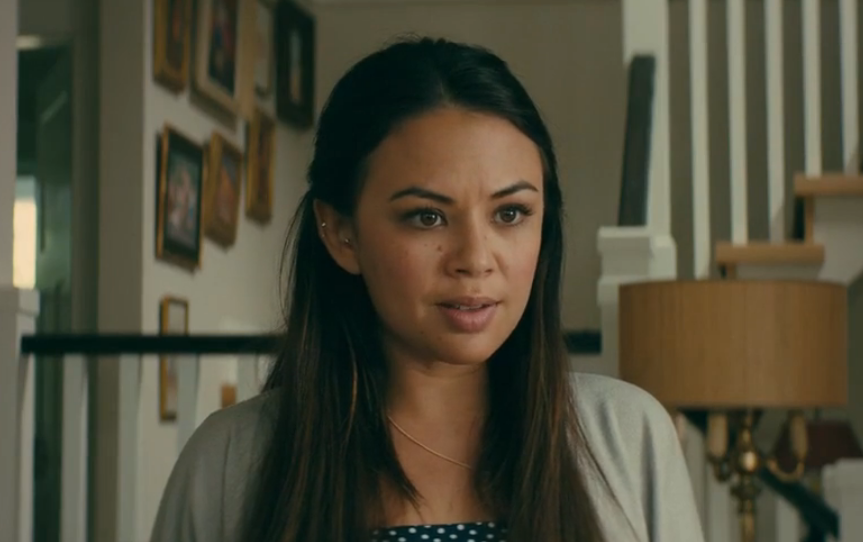 FREAKING THIRTY. That’s more like it. Doesn’t have to bother you too much though because she leaves and breaks up with her boyfriend Josh who has ALSO been Lara’s big crush since she was little.

Why does Lara love him? He says he wants to drink pee. But when he’s around Margot he says he doesn’t like drinking pee. Talk about being #whipped.

So basically Lara Jean writes these big juicy love letters to her crushes and they get out because her little sister Kitty wants her to start branching out and making friends. She does this because Lara Jean almost hit the hottest guy in school (Peter Kavinsky) with her car and then he laid down moves on LJ for 5 minutes as if he wasn’t just about to get run over. Little sis sees this and is like “whoa someones got the hots for Lara” and wants to spark up a romance between the two.

That being said, we gotta talk about my boy Pete Kavinsky. This guy is just confirmed a teen heartthrob. My guy DRIPS confidence.

He’s making jokes, walking around talking to chicks left and right, he’s a sweetheart. Not to mention, he’s got a body carved by the gods.

They go to the diner and he’s like “I came to take down one of these chocolate milkshakes”, bro what? With that bod? This is high key the most unrealistic part of the movie (besides Lara’s , , sister’s age). He drinks like 3 milkshakes throughout this movie yet when he’s in the hot tub he’s spread out like bachelor in paradise contestant toned as hell. 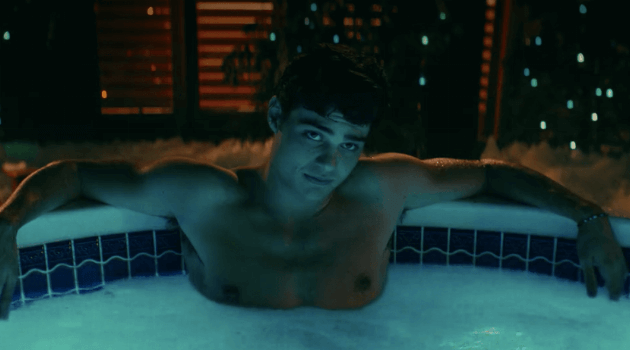 He needs this bod to play Lacrosse, which basically doesn’t come up in the rest of the movie besides when he takes his helmet off and he’s got the most fire hair of all time.I wear a hat for two seconds and my hair is done for the day matted against my skull, Pete whips off his entire head-encompassing helmet and he’s got bouncy voluptuous hair straight out of a Dove for Men commercial. We all talk about setting unrealistic expectations for body images but how about hair? How am I supposed to feel any sort of satisfaction in my hair when you got guys like Cole Sprouse, Jon Snow and this dude just walking around like they don’t have a picasso-esque masterpiece on their cranium. Although this movie has a couple stretches, like how I’m supposed to believe Peter is drinking a green gatorade in this scene.

Green? Is that even a color they sell or did he mix yellow and blue in that sucky-top bottle? Either way, psycho move. While I’m on this other little gripe I might as well get to my other minor annoyance of his, which is his voice. He’s got that “I’m a hot Instagram model” voice that is so cocky and just fake? In a way? That it irritates me. But to be fair he is just a dumb hot dude so I guess he earned it. Someone who I have zero complaints about? My girl Lara Jean. 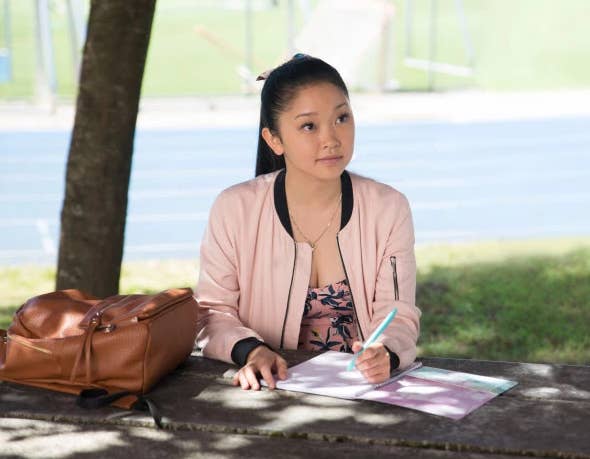 This girl, Lana Condor, slammed this role out of the park. Such a relatable, funny, and fleshed out character ESPECIALLY for a netflix rom com. I was thoroughly impressed by her performance but also her ability to pull off some FIRE fits.

Every day LJ wakes up and goes, “how am I gonna stunt on all these hoes today?” and walks the halls looking like a living icon. When Genevieve (her arch nemesis) comes at her for her boots and Lara and her friend are stealing looks from Peter, she’s like I don’t even need a comeback imma just steal your bf. BOSS. 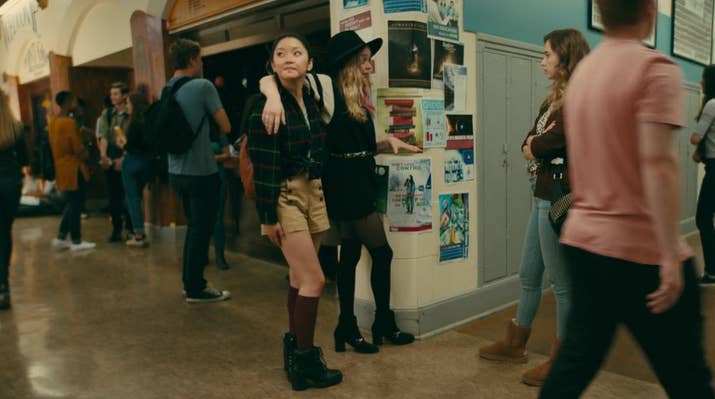 Although I would’ve rather had her slap Genevieve across the face in front of the whole grade because she is EVIL. 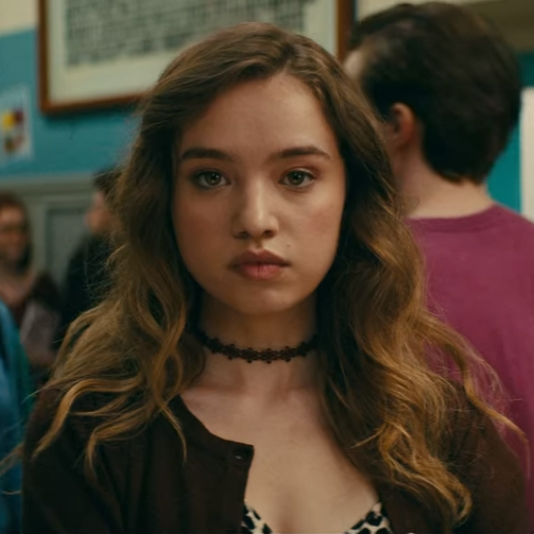 This girl is the “Joker” of Rom Coms. She knows exactly how to mentally manipulate her enemies. Gen comes at Lara like “you want a drink, oh wait you’re lame don’t drink” and then Lara metaphorically drop kicks this bitch saying “Peter is already getting me a drink”.

So my girl now follows Peter into the mens’ bathroom in order to STEAL a scrunchie she KNOWS is Lara Jeans. And then SAVES the scrunchie for the ski trip specifically to use it to destroy Lara’s relationship at it’s peak. It’s almost admirable how cleverly dastard she is. Tbh I was kinda rooting for her after that hot tub scene though I mean the movie banged an illegal sexual U turn in seconds. The whole time Lara’s talking about taking it slow and being pure and innocent and a fun family girl but then next thing you know the two are going AT IT cranking the hot tub up to 169 degrees. [Editor’s Note: No judgment however, part of breaking gender barriers is accepting sexual positivity as long as she was being safe good for her.]

Those characters being talked about though, let’s just look at some of other great parts of this movie.

This scene where they are first kinda getting into their family stuff and why Lara doesn’t want to let people into her life is a theme that I feel like has been touched on in so many movies but this one felt so real. It didn’t feel cliche and idk if it was the writing or the way these two played their characters but it was really simple and also showed what great chemistry these guys have. I also think that contrast of loving romantic movies and novels but being afraid of it in real life was a great paradox a lot of people have experienced.

Lara Jean’s dad is also a G. He’s like the Trivago Guy if I didn’t freaking hate the Trivago guy. He’s what the Trivago guys thinks he is like. Great charisma and, again, you see great chemistry between him and the kids which I always enjoy seeing in teen movies where the parents are usually dismissed altogether.

I also loved when Genevieve confronted Lara about her kissing Peter in spin the bottle. My girl on Thanos mode coming in with a STRONG villain motive. Yeah it might’ve been middle school but middle school crushes are another entity. If one of my boys kissed the girl I liked in 6th grade I’d probably do something freaking crazy like not invite him over my house anymore to play MarioKart wii. Real talk.

When Peter said, “This Bon Iver wanna be” I was in SHAMBLES. Put Josh in a BODY BAG. The minute he came out looking like Eminem in the BET freestyle video I wanted someone to roast him and Kavinksy delivered.

when Lukas lays down the facts. Lara Jean don’t sell yaself short girl. He lays out all these things that I as a viewer even kinda slept on, wake up LJ, Petey K is struck by you.

One thing I gotta say is that they gotta put some damn rules in at this high school. They’re hanging out 24/7…do they have homework?? I’d go to school, go to practice, get home and spend like 3 hours doing homework. Maybe sneak an episode of Parks n Rec in but besides that weekdays I had little time to be just chilling at friends houses willy nilly. Also, don’t get me started on the ski trip. Basically an underage orgy happening annually and the teachers are just like “whatever”, letting the hot tub get filled up with boiling sex juices. Nasty.

I loved how messy her room was. It wasn’t like “I’m a messy relatable teen!” it was just what most teenagers rooms actually look like. Some pics up, some random novelty items around the room and then just hella clothes on the ground. This is why I think I really loved this movie. There are so many shots in this movie and minor details that really take the movie above the genre of “rom com”. This being a netflix movie with little known actors, I’m sure the budget wasn’t super high and I’m sure the director (Susan Johnson who deserves massive credit for this movie) could’ve just took the paycheck and called it a day. But she didn’t. There are so many low key beautiful shots and scenes in this movie. So aesthetically pleasing and well placed that it makes the movie 100x more enjoyable to watch. Probably one of my favorite parts of this movie was so low key but also so cool.

When Lara couldn’t find anyone to sit with in the cafeteria and went to the library to eat lunch alone in the quiet…it straight up moved me. I always had a weird thing with my anxiety where I could not get lunch in the caf. For some reason towards the end of my junior year of high school I just couldn’t bring myself to do it. I could probably count the amount of times I ate lunch in the cafeteria on two hands for my senior year in high school. It was hard to explain to people I was sort of embarassed by it but seeing that scene in this movie was so cool. It was just a reminder I wasn’t the only person who felt these seemingly dumb anxieties about high school tropes. From her plugging in her headphones to clean her room, to not going out on saturday to hang with her sister, there were all little things that were so genuine and real to kids in high school and not just scenes written by a studio exec who thinks this is what the kids are doing these days. Just a testament to why I love movies and I appreciate a director taking the time to put these small details in.

Well after searching “Peter Kavinsky Hot Tub, Peter Kavinsky hair, Peter Kavinsky bath robe, and Peter Kavinksy leaked nudes” I should probably end this rambling review. Overall, this movie was a fun treat that I highly recommend. Between this and Set It Up, Netflix is on a flaming hot streak with rom coms. Let’s hope they keep it up.

And, in case you missed my first installment on Harry Styles, you can check that out here.