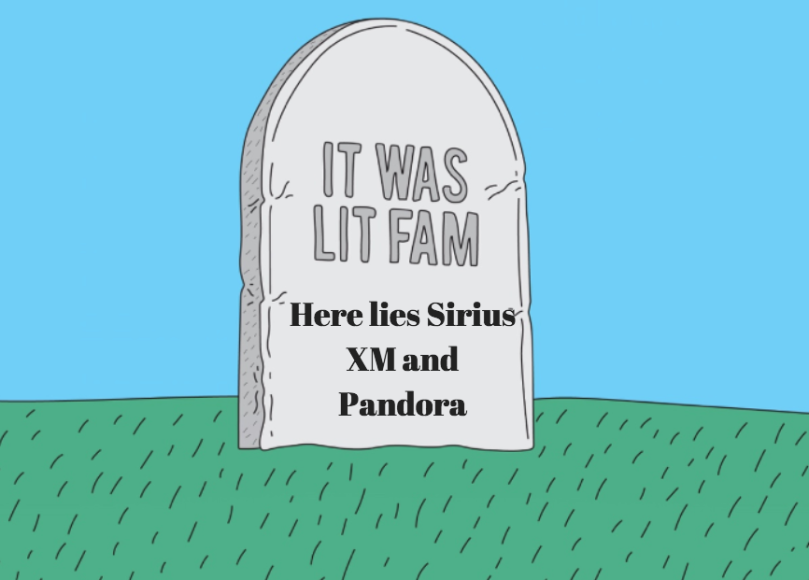 SiriusXM will acquire Pandora in an all-stock transaction valued at approximately $3.5 billion, the companies announced Monday.

According to the announcement, the deal will create “the world’s largest audio-entertainment company,” with more than $7 billion in projected revenue in 2018 and more than 100 million monthly listeners, combining SiriusXM’s 36 million subscribers and Pandora’s 70 million-plus monthly active users. It also moves SiriusXM and its parent company, Liberty Media, aggressively into the streaming market. via Variety

If you told me this deal was going through in like 2013 I’d say Sirius is gonna be the new Apple. It’s all over for any other music company (basically iTunes and maybe the earliest form of Spotify were around then).

Back in those days Pandora was the greatest thing ever invented. You didn’t want to have to pick out songs, you could find new music similar to your interests, and you’ve essentially got thousands of playlists at your finger tips. Junior year of high school it was an easy flirting mechanism for me, telling girls what playlists were my go-to’s. Me and my friends would listen to Daniel Tosh Radio during study period and crack up at his stand-up. It was an amazing app and looked like it was the future of music. Then we’ve got Sirius. This is the kind of radio your rich friend’s dad had in his car. It’s got that station that only plays Bruce Springsteen songs and that’s worth paying $40 a month in his mind. No one under the age of like 30 has a Sirius subscription because it’s meant to be listened to in your car on the way to and from a 9-5 job that shouldn’t still exist like a travel agent or an accountant (yeah, I said accountant. Your job is all math and numbers. Robots will be doing your job by 2020. Pivot career paths while you can.)

This brings me to my point: both of these companies are wayyyyy past their prime and this merger is just going to make them fall ever harder. They used to be two wealthy retiree’s yachts with a couple patches of duct tapes over their leaks, but now? Now they’re the Titanic setting course for the big Iceberg of Bankruptcy. When their ship finally sinks they’ll say “Gentlemen, it was an honor picking stations with you” and play “My Heart Will Go On Radio” as they clean out their cubicles.

There are two kinds of people who still use Pandora. The first is mundane employees whose silence in the workplace makes them think about their meaningless existence so they drown it out by playing “The Eagles Radio” on their desktop. The other is just quick service restaurant owners. Subway, Dunkin’ Donuts, Panera; these guys all just toss on “Easy Livin’ Radio” and let their employees lose their minds after hearing Jason Mraz scat on “I’m Yours” for the 5th time in one day.

They also don’t have any partnerships with artists. Apple’s got their boy Drake, Spotify hooks up Ed Sheeran, Tidal’s got Beyonce and Jay-Z, even Soundcloud has Chance the Rapper to endorse them but Pandora? Nobody’s dropping an album as a Pandora exclusive. I’m the biggest Kanye fan but if Yeezy was like “SURPRISE! New album exclusively on Pandora Pro! Check it out!”, I’d still be like eh how much is the subscription? It just doesn’t hold a candle to the others.

And who does Sirius have as their biggest name? Howard Stern. Jesus this guy looks like a bald crack addict found an afro wig in a dumpster behind a nightclub after their annual Halloween party. Stern made a big name for himself on the radio for being super “controversial” and “funny” decades ago, and good for him. But guess what Howie? Everybody’s done with controversially funny now because it doesn’t surprise us. Movies like Borat and American Pie and Harold and Kumar and stuff are all very funny raunchy movies that stem from the same kind of humor you pioneered. They were funny BUT they also came out at a different time. Listening to a 40 year old man talk about sex on the radio might’ve been funny in 90’s but listening to a 65 year old man talk about eating ass is just disgustingly boring.

I mean he does fit the demographic of Sirius and Pandora users.

Their target market is going to lose their hearing within 5 years.

Not the best business plan.

I bet the guy who came up with this strategy is the same guy who projected the “$7 Billion in revenue” for the company this year. Just an absolute moron who’s got way too much responsibility. Give it two years when they’ve got 43 combined subscribers and $367 in annual revenue and this guy’s going to be known as the nail in the coffin of these two dying companies.

Short the stock of these companies now and you’ll have more money than these two combined by 2025. You’re welcome.