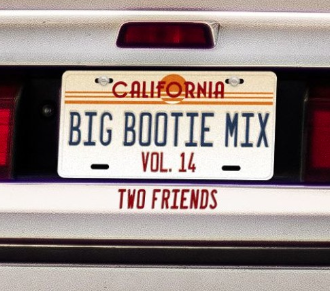 The Big Bootie Mix series is probably the greatest innovation to happen in the Pre-Game industry in the past decade. Pre-game music and drinking combos have evolved exponentially over the past 60 years.

1960’s: There’s probably some kid playing Grateful Dead on the guitar while you smoke weed before going to burn stuff in the streets in the name of peace.

1970’s: Listening to vinyl records of the Jackson 5 as you drink cocktails and smoke those cigarettes that we’re always endorsed by men with their shirts unbuttoned way too much.

1980’s: The radio blasts Whitney Houston as you inhale hair spray and work on your dance move’s so you can tear up those rainbow dance floors they had at disco’s that I’m always angry I never got experience.

1990’s:  A cassette tape of Nirvana plays while a bunch of flannel-clothed kids drink MD 20/20 in a Ford Taurus and get too angry and depressed about Kurt Cobain that they decide to not even go out.

2000’s: A boombox in the corner bumps Nelly while you drink Kool-Aid Vodka mixies and play beer pong.

2010’s: An eager kid grabs the aux and let’s a “Party Jams” playlist he made run from the iTunes app from his iPod touch while the same kid tries to teach you a way too complicated drinking game and everyone gets too confused and you just end up playing flip cup.

But just in the past few years, there have been even more advancements in pre-game technology. UE Booms, Bose MiniSoundlinks, and of course my beloved Tailgater have revolutionized the game by letting you walk around your party without needing to have your phone connected to anything but Bluetooth.

We also were introduced to streaming services. Not only did they come with pre-made playlists designed for every occasion, we also can look up ANY SONG WE WANT AND PLAY IT for like 10 bucks a month? I spent like $20 a month when I had itunes just to get like 14 songs. I feel like people don’t talk about how absolutely wild it is we have this power. Imagine being at a party and someone’s like “hey man you should play Die Young by Kesha next” and you have to say “sorry bro but that costs $1.29 and I’ve only got $0.99 in my account”, WHAT??? We’re musical gods now, being able to conduct the vibe of a party without touching anything. The fact we can say the phrase “Alexa! Play [insert song here]”, and we just start hearing a robot play whatever we song we want is legit a Thanos-level flex.

But with all of these musical options it’s almost hard to decide what to play. Sure you might have a go-to playlist, but there’s always going to be kids requesting songs and looking for the whoever’s phone is playing the music. Not to mention it’s hard to get the people going before you actually leave to go out for the night. There’s always one kid who wants to play the classics way too early (I don’t want to listen to All Star by Smash Mouth unless it’s 2am and I don’t know where I even am) and then there’s the kid who wants to play dark trap music to get everyone “pumped” (I’m sorry but listening to a song called SAD! by a man who literally died a few months ago isn’t going to get me super excited for the night). But then, we got a perfect balance of the two. A blend of classic songs you know all the words to, and the most popular songs on the radio. That my friends, is the Big Bootie Mix.

The EDM duo Two Friends is probably most known for their absolute heaters of remixes. They’ll put their own spin on the most popular songs (like IDGAF by Dua Lipa) but also some fun throwbacks (like Touch the Sky by Kanye). These are all dope, but then they decided to give us BANGER CHRISTMAS by making an hour long continuous mix of all of these songs perfectly crafted into a sweet little gift-wrapped present called The Big Bootie Mix.

This most recent one is the 14th installment of the series and it’s just as good as all the others. One of the first things the beat drops on is legit Brett Kavanaugh saying “I LIKE BEER”. Now I don’t like Brett Kavanaugh or anything he’s ever done, but the fact they used his delusional shouting about alcohol during his job interview as an EDM drop is incredible. Between that, Jared from Silicon Valley saying “How would you like to die today motherf**ker” and “it’s not delivery it’s DEEZ NUTS”…they’re clearly just having a good time making these for us.

This particular ones mix some of my favorite newer songs like “One Kiss” and “Jackie Chan” with throwbacks you’d never really think to remix like “My Own Worst Enemy” and “Unwell”. They transition the beats quickly so you never get bored, you don’t have to think about what’s on next when you put it on, and it’s main objective is to get people in a fun mood, and they achieve this objective every time.

It almost makes me sad listening to it being out of college. All of senior year Volumes 12 and 13 were constantly being played before heading out to the bars or the house parties. That was it’s purpose: get the people going because you have little to no responsibilities. You’re young. Full of life. The world is your shiny slimy oyster waiting for you to reap its pearls. What do I use this mix for now? To distract me from how out of shape and exhausted I am while running and to wake me up on my commute to work. Not as cool. Not to mention every time I listen I gotta remember that just 5 months ago I was bumping these on a Tuesday night playing games and drinking with my 9 best friends I lived with. I’ve got that overwhelming nostalgia while I’m I listening to the same mix in my childhood twin bed at 8 o’clock hoping the sox game doesn’t go too late so I’m not groggy at work tomorrow. Tragic.

Is it weird for me to like this even though I graduated? Like is 22 too old to be listening to the “techno” music? Maybe. But I don’t care. I’m crushing this playlist. This is probably going to get me too excited this weekend and I’ll have a little bit too much fun and have to nurse the monstrosity that is a “post-grad hangover” with some Pedialyte, but it will be worth it. The man can’t keep me down. Those of you still in college, cherish the thrill of Big Bootie while you can. Let it’s energy take you over as if you injected an IV of Four Loko into your forearm. Get wild, get crazy, and hail the beauty of the Bootie.