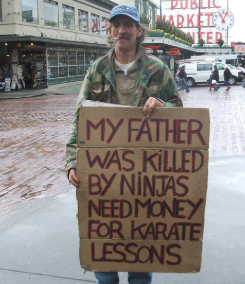 Every day wake up in the twin bed that I grew up in, get in my 2008 Ford Escape, drive into the Big City (Providence, Rhode Island), and take the 5 minute walk from the parking garage to my building where I work my full-time entry-level job. As you can tell from that last sentence, my life is pretty amazing. But each day as I take that short walk at 8:30 in the morning, I pass a cast of characters I think most people would consider less fortunate than I, but I beg to differ.

Homeless people are some cool sons of bitches,

and I am oddly jealous of them.

I guess not all these people I pass are necessarily “homeless” (though I’m sure many of them are), but rather this wide range of people I’m discussing are just the wild card products of the city of Providence. They just chill on the sidewalks, park benches, and corners absolutely DRIPPING in swagger. I’m walking into my office with my head down, afraid of the world that surrounds me, and these people make the world their bitch.

Here are a just a few ways these street creatures are cooler than me:

You know who’s not catching looks on the streets? Me. I’m wearing the same khakis, gray sneakers, and navy blue long sleeve shirt that every other young white dude decided to put on for the day. You know who IS getting checked out left and right? The dude on the corner rocking embroidered jorts down to his calves, sporting an Ed Hardy T-Shirt on top, and capping all that off with a an all-white knockoff Red Sox hat tilted to the side. That’s an outfit you need confidence to pull off, and my outfit shows I’ve got none of that. I’ll be walking on the crosswalk and a car will come in and beep their horn and I will scream “Sorry!” instinctively in hopes the car doesn’t get angry with me for LEGALLY WALKING WHERE I’M SUPPOSED TO. Meanwhile, homeless people know when they’re in the right. I saw a dude the other day in one of those scooters fat people ride around in the grocery store. He was stuck behind this other large woman who was walking slowly, distracted by her phone (the worst kind of person). What would I do in this situation? Probably just keep my mouth shut and accept I wasn’t going to be increasing my speed any time soon. What did scooter man do? He yells “Move out of the way or I’m gonna run you over you fat b*tch!” WHOA! I mean first of all, this dude is fatter than the woman he just called fat. Basically just telling her if she’s gonna be that slow on foot it might be time to invest in a scooter like him. Secondly, the AUDACITY! This social warrior took one for the team and called out a slow dumb phone-starer holding up foot traffic like we all want to but don’t have the guts to do so. A real king.

Back in the day (like 5 months ago), I was quite the party animal. If it was nice out it wouldn’t be wild for me to start drinking around 10:30-11 AM and keep it going into the night on a weekday. It was a wild time. So young, so full of life. But now, as I’ve grown and matured (yeah, I have car insurance now), I live by the party schedule society has laid out for me: maybe a beer or two after work, and then going out to expensive bars on the weekends. In a way you could say that the Man kept me down, but not the sidewalk wanderers. Nope. I woke up an hour and a half ago and these dudes are slamming back 40’s on the bench bumping music from an iPod Touch and rapping along. Oh there’s no parties going on in the streets downtown providence at 8:45 on a Tuesday morning? No problem. These guys start their own.

The biggest animal I’ve ever had as a pet was ducklings, but that was only for 2 weeks. They weren’t pets as much as animals I was training to survive in the wild. They were basically rescues (rescued from some crazy woman I found on Craigslist’s backyard in Smithfield, but rescues all the same). That being said, I’m jealous of hobo pets. Whether it’s a dude throwing an entire loaf of bread on the side of road welcoming a swarm of pigeons who in turn see him as a god, or the guy who carries his dog around like a baby as it’s rabies-induced barking continues uncontrollably, I just wish I could have one of those cool little guys to call my own.

When you can’t afford razors, you end up growing some sweet gnarly facial hair. The only facial hair I can grow is patchy and in all the wrong places. I’m self conscious about it so I shave probably twice a week. These guys haven’t even shaved in two months. They’re looking like grizzled woodsman. The mystery and allure of a beard is powerful. Ladies walking down the street can’t break the spell of a mystical beard, they’re caught staring at Hagrid smoking Newports on the corner for all the right reasons. I’m walking by with a face as smooth as a newborn baby. I look like Tom Hanks from Big, these guys look like Tom Hanks from Forest Gump.

It’s pretty clear who’s the alpha male between these pics.

Now I know what you’re going to say. “Come on man these people have really really tough lives, most of which they have little control over. You’re using your privilege to exploit them for content.” OHHHH so the person rich enough to get on the internet and read this half-bit blog that’s basically un-promoted is the person “high and mighty” enough to criticize me? Well guess what A-holes, check this out.

You’re welcome. $10 of my hard earned money going to getting these people off the streets and into homes. So before the fake news media paints the picture that I’m an insensitive monster, check the receipts.